Celebration Pyrotechnics can choreograph and fire a range of specialist stage effects and conventional pyrotechnics for outdoor events and theatrical performances.

We designed and fired battle and romantic effects for the successful “Love and War” play held at Trelissick Gardens (National Trust) by The Cornish Theatre Collective. Special cannon charges were made for the “Prince of the Burning Sun” production at the Minnack Theatre, complimented with battle flashes and flames.

At the Eden Project, we created a giant night sky effect with twinkling strobes and brought three 6 metre metal figures to life to conclude their Time of Gifts ‘stars & dreams’ themed lantern parade. 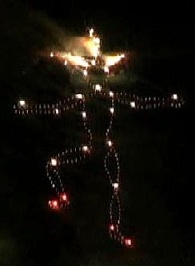 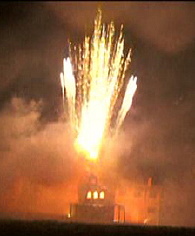 To commemorate the 150th anniversary of ‘The Great Fire of Chudleigh’, we pyro-animated a 1:2 scale model town, built by members of the Chudleigh Historical Society, to depict the chain of events that raised the town to the ground. Our specially constructed bonfire charges set this model town ablaze. The evening celebration was suitably rounded off with a spectacular firework display.